Keep On Rockin' In The Free World

April 14, 2009
A sold-out crowd at the K-Rock Centre in Kingston was lucky enough to keep on rockin' in the free world last night for close to two hours with Neil Young and thanks to the kind largesse of my brother I was very happy to be among them as a guest in the Motosport Plus corporate box.

I'd seen Young in Ottawa back in December, but the Kingston show felt more intimate in the smaller venue. Smaller venues are where Young is taking this tour. His next stops include London, Ontario, Sault Ste. Marie, Saskatoon, Kelowna and Lethbridge. Below are some shots I snapped, last night's set list and a review of the concert in today's local paper... 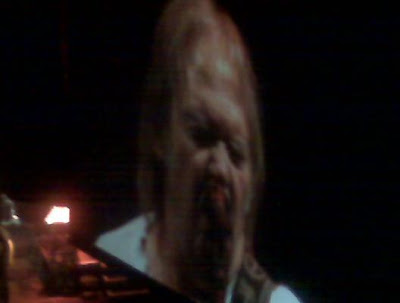 Review: Kingston Whig Standard
by Greg Burliuk
Crowd roars at Young show
On the title song of his new CD Fork in The Road,Neil Young jokes about having a pot belly and how his record sales have tanked, the implication being that he's a has-been.Try telling that to the 6,500 fans who jammed the K-Rock centre last night to greet the legendary Canadian rocker with a massive wave of affection.It's true that Young hasn't had a hit of significance since 1989'sRockin in the Free World, but he has been staggeringly prolific. Between 1966 and 1997, there was only one year when he didn't release an album and in a couple of years he released two.The first five songs of the 90- odd minute show in that sense were a reflection of Young's career. They ranged from 1969's Everybody Knows This is Nowhere to 2007's Spirit Road. Among them only Everybody Knows was a commercial hit, but the biggest cheers were reserved for the 1979 song Pocahontas,a concert staple. This was a crowd that loved the staples. They roared when Young broke into a wild guitar solo on Cortez the Killer,his 1975 classic with an intro so long you'd think it was an instrumental. They recognize within three chords, the opening of another 1969 hit Cinnamon Girl,although they are so distinctive they aren't hard to spot. More impressive was many of them singing along to his 1972 standard The Needle and the Damage Done.The latter was part of an acoustic portion of the show, which included his only number one hit Heart of Gold;and Old Man(both from 1972's Harvest album). After he finished the latter, Young pointed to the roof (or maybe the stars) in a reference to his late father Scott Young, who lived in Kingston until his death a few years ago.There was a smattering from Young's brand new CD Fork in the Road,which is largely dedicated to promoting energy-efficient cars. The highlight of the five songs played from that work was the hopeful Light A Candle. The new ones fit seamlessly into the old ones because there is a timeless quality to this man's songs. The mellow ones are classic folk and the rockers don't rely on frills as much as gritty power chords.Young wasn't particularly chatty, but neither was he unfriendly, focussing on singing and playing mostly with his eyes closed. (Why then were there large cue cards continually being replaced at his feet?) The man can still rock however, as his guitar-playing was as much a highlight as were the songs themselves.Particularly impressive was his axe work on one of the show's closing songs, the anthemic Like a Hurricane from 1975. 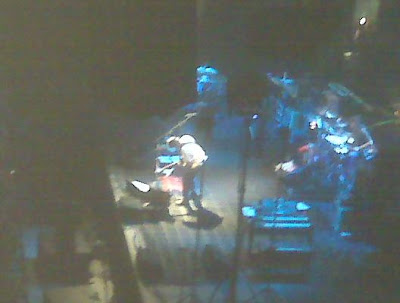