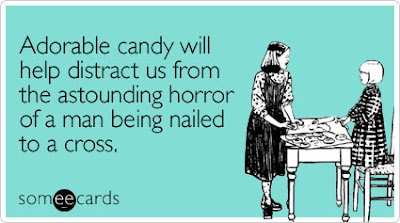 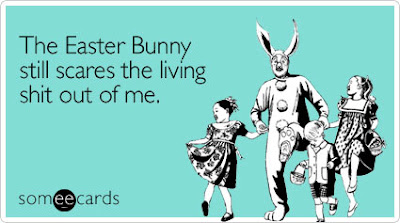 What Is Easter?
Three stupid guys just died and are at the pearly gates of heaven. St. Peter tells them that they can enter the gates if they can answer one simple question.
St. Peter asks the first man, "WHAT IS EASTER?" The man replies, "Oh, that's easy, it's the holiday in November when everybody gets together, eats turkey, and is thankful..."
"WRONG," replies St. Peter, and proceeds to ask the second man the same question, "WHAT IS EASTER?"
The second man replies, "No, Easter is the holiday in December when we put up a nice tree, exchange presents, and celebrate the birth of Jesus."
St. Peter looks at the second man, shakes his head in disgust, looks at the third man and asks, "WHAT IS EASTER?"
The third man smiles and looks St. Pete in the eye."I know what Easter is. Easter is the Christian holiday that coincides with the Jewish celebration of Passover. Jesus and his disciples were eating at the last supper and He was later deceived and turned over to the Romans by one of his disciples. The Romans took Him to be crucified and was stabbed in the side, made Him wear a crown of thorns, and He was hung on a cross. He was buried in a nearby cave which was sealed off by a large boulder. Every year the boulder is moved aside so that Jesus can come out, and if He sees his shadow there will be six more weeks of winter."

little paulie k said…
I am also a 60's pop-cultural over-the-counter counter-cultural, demythicizer--I don't even know where that came from--the limbic region surely I have no limbaugh region in my head. One student of a friend drew a parody-picture of a crucified chocolate Easter bunny with the caption: "he died for your teeth" which is bitter sweet no doubt and what the American Dental Assoc. lives for.
12 April 2009 at 06:37

nonamedufus said…
dani: Yeah the one on your site sure loosened my bowels!

dizzblnd: Yeah, ya gotta be a basketball fan...

little paulie k: Yeah I think it musta been Laura Secord who first associated chocolate with Easter. Oh, well, at least it wasn't liver and lima beans.
12 April 2009 at 11:47

Count Sneaky said…
The answer to the first riddle is: It results in a very cross hare! I like that phrase that little paulie k uses: "the LIMBAUGH region of my brain"..funny! May I steal it? Count Sneaky
12 April 2009 at 17:51

Go ahead and do with it as you please. I've had all my stuff literally stolen aver the years by misguided landlords and thrown in the dump. Fools Rush in where angels fear to tread water over the dam to put 2 adages together to erase the limbaugh lobe or the brainless wonder of his mindless monoblog.
12 April 2009 at 21:31

little paulie k said…
I am also a 60's pop-cultural over-the-counter counter-cultural, demythicizer--I don't even know where that came from--the limbic region surely I have no limbaugh region in my head. One student of a friend drew a parody-picture of a crucified chocolate Easter bunny with the caption: "he died for your teeth" which is bitter sweet no doubt and what the American Dental Assoc. lives for.
12 May 2011 at 15:13