Well, tomorrow's Blog Blast For Peace Day; a day when bloggers around the world all blog about one thing: P-E-A-C-E. It's a serious subject. But seeing how I manage a humour blog I have a bit of a different take on the subject. This is the post I've published annually for the last couple of years. Due to popular demand, namely mine, I thought I'd run it again. Enjoy. And peace.

In the giant land of Gastronomia, government leaders and their bureaucrats were all in a tizzy. The plump Prime Minister of Gastronomia was about to host a conference of the world's key leaders to discuss the fragile state of peace in the world and there wasn't a moment to lose to ensure, down to the minutest detail, all plans could be accomplished in time for the upcoming meeting of the Gastronomic 8.

But those things paled in comparison to the responsibility handed to Chance Essare, the Prime Minister's chef. Even though he wore a silly grin, Chance had been delegated as the point man responsible for the conference's menu. Yes, that's right. In the land of fine food, Chance would have to whip up the perfect meal. Chance knew the culinary challenge that lay before him, and the special kitchen implements required to do so, but he was a professional and it was a whisk he was willing to take.

Chance alone would be responsible for keeping the Gastronomic 8 satiated and satisfied. The slightest mistake could result in gastric acid or indigestion at the conference table manifested by a possible hiccup in the proceedings. Heaven help us all if Chance's repast jeopardized world peace and resulted in resounding burps flying across the table like the reports of AK-47s. Worse yet, if Chance's vital vittles were more difficult to digest than the oratory of the peace discussions, odours of war might arise far worse than any pungent mustard gas from World War I.

But what to prepare, what to prepare? Chance knew he had to come up with a culinary delight that appeased all members. A Cordon Bleu dish might tick off the Italians. Similarly, a pasta delight might blow-off the Brits, although they weren't known for their sense of taste, let alone their sense of style. But that's a story for another day. For days Chance stewed (pun intended) over his dilemma.

After two weeks, his sous-chef, Sue (that's right, a real Sue chef) and other sundry cook-like assistants intervened and arrived at a dish sure to preserve peace around the table and thus ensure peace around the world. Chance was amazed at it's simplicity and knew Sue and her culinary colleagues had saved the day with their immortal words: 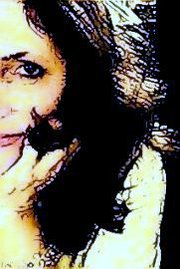 There are many other takes on "peace" to be found @ Blog Blast For Peace. And I'd be remiss if I didn't give a tip of the hat to Mimi Lenox, the founder and director of Blog Blast For Peace. She has been the driving force behind this worldwide effort every year. She works tirelessly for the cause 365 days a year. Personally I don't know how she does it and still retains her good looks.

meleahrebeccah said…
I've never read this blog post before and I am so happy you reposted it!
LOVED IT!

travisutr2006 said…
I should tell you that this silly little story is a high light of my Blog Blast Day. It's way easier to be peaceful when you're giggling.

Anndigirl said…
Who can be anything but peaceful when having a good giggle? Perfect!
4 November 2011 at 15:20

susan price said…
Darn the lactose intolerant who never give pizza a chance! And when they do...oh the horror!
Peace 2 you!
5 November 2011 at 02:07

Adellelaudan said…
Laughter knows no boundaries.
Peach be with you and yours.

nonamedufus said…
Well, I'm glad you came back even if the pizza might have been a little stale.
5 November 2011 at 17:38

nonamedufus said…
Well and let's hope one day peace will know no boundaries.
5 November 2011 at 17:42

nonamedufus said…
I guess the lactose intolerant would have to make do with vegetables and just give peas a chance.
5 November 2011 at 17:43

Mimiwrites2005 said…
Thank you for the hat tip and this very funny punny post on peace day that has caused me to lapse into alliteration. See?
I agree with the above. It's such a simple thing to laugh and smile. You made me do both today and that's tres peaceful.

nonamedufus said…
Thanks, Mimi. I truly admire the efforts you make year round in the name of world peace. I'm glad you enjoyed my little story...again.
5 November 2011 at 19:31

Thanks for that...it did my belly good x

Peace to you and yours

December 16, 2017
I know, I know, I know I should have reported in before now. But sometimes real life just gets in the way. I attempted 5 books in November. I say attempted because I slapped a big DNF (did not finish) on Neal Stephenson's Cryptonomicon. I just can't seem to get into this guy. It's the second or third of his I've given up on, Not so the other four, starting with a biography of Stephen Stills called Change Partners. This followed by a hilarious biography of the guy responsible for National Lampoon called A Stupid and Futile Gesture - How Doug Kenney and National Lampoon Changed Comedy Forever. I ended the month reading yet another biography, this one of the man behind Rolling Stone magazine,. It was called Sticky Fingers: The Life and Times of Jann Wenner and Rolling Stone Magazine. A fascinating read. So last month I hit the magic number 50 I'd imagined for myself back in January. If I roll this month into my yearly total I'm at 54 books. And I still hav
Post a comment
Read more