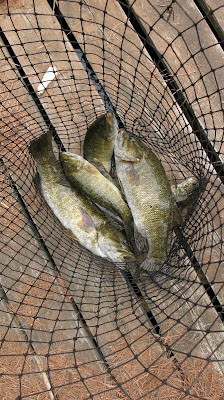 For about 8 years now several of us have been hitting Lake Temagami in northern Ontario for a week of fishing in late June/early July as soon as bass season opens. The characters change a bit from year to year: another friend, a brother or two but the two mainstays have been me and my buddy Pierre. Some years we catch a ton of fish and others very few. But at the end of the day the beer's always cold and they have to carry you away from the dinner table 'cause the home-cooked meals at the lodge are to die for.
Temagami is about an hour north of North Bay and for us about 6 hours from Ottawa. The first year I ventured forth I didn't know a bass from my ass, had to get Pierre to worm my hook and if I caught a fish, forget it, someone else had to take it off the hook! And clean it? Yeah, good luck with that.
I've come a long way since then. I can bait my hook - using rubber worms. I call it the prophylactic approach to fishing. Don't laugh, you'd be surprised at how many fish I've caught practicing "safe fish"! And this year, after 8 years on the lake, I've cleaned fish! It helps when everyone else refuses to do it and you want fish for dinner! Just give me a sharp knife and watch me go. I'm a clean and gut master.
Over the years, we've had a lot of fun and some interesting experiences. For example, several years back Pierre and I were out in the boat one afternoon when for no apparent reason the engine stopped. Try as we might we couldn't get it going again. So we paddled across the lake to a dock and prevailed upon the owner of a cottage to use his phone. We called the lodge owner where we were staying to see if he could come and get us. As we waited it started to rain and by about half an hour later when the lodge owner arrived in his boat it was pouring. As the cottager, the lodge owner Pierre and I huddled over the engine the cottager innocently inquired "Does this boat have a kill switch?" A kill switch is a safety feature. You attach the ignition key to your life vest so that if you fall overboard the key is yanked out of the ignition and a switch flips to stop the engine. Pierre said quietly, so quietly we could hardly hear him "Oh, shit!" As the rest of us looked on, drenched to the skin, Pierre flipped the switch, turned the ignition and the boat roared to life. It took him the rest of our stay to live that one down back at the lodge!
All in all though it's a great guys' week away. And truth be told our wives appreciate a week to themselves too!
Later this week, I'll talk about my "special" fishing week breakfast and give you the recipe. Don't get too excited. Remember, this is a guy thing. In the meantime here's some photos from this year's trip. 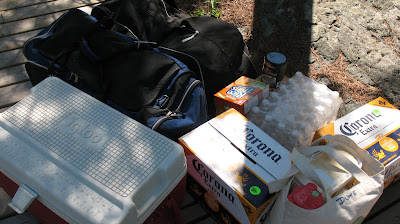 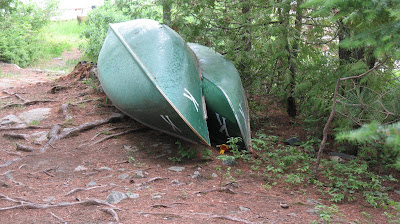 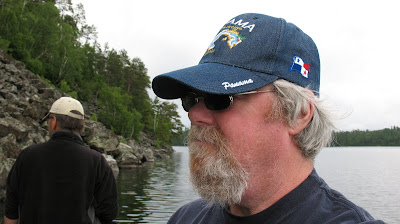 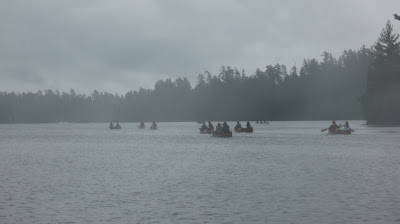 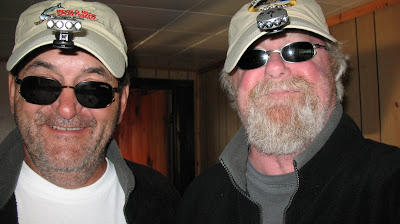 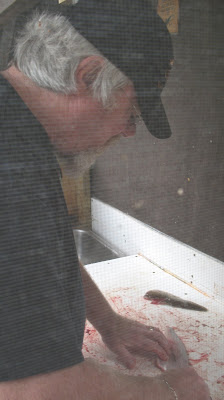 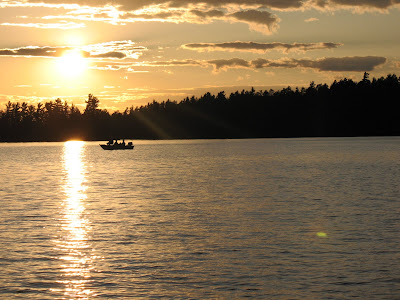 nipsy said…
WOW!! Sounds like you had a good time.. thanks for coming back and sharing the pictures. Some of my best memories are of fly fishing in a small creek on a backwoods road in West Virginia..and I am immensely glad I do NOT have the pictures from back then..:)
8 July 2009 at 09:20

nonamedufus said…
nipsy: The weather was the pits but, yeah, we had a great time. This year, my pal only dropped my fish into the water getting out of the boat one night!

Canadian Blend said…
When I was 11 or so (1971) the family (and a bunch of aunts and uncles) went to Rice Lake in Ontario. Back then the border crossing was pretty simple -- when we told the guard we were going to Rice Lake he said, "I should have guessed. All the Ohioans are going to Rice Lake today," and he sent us on our way.

We fished and swam all week. One of my cousins caught a 5-pound bass off the dock.

nonamedufus said…
Canadian Blend: Thanks for that experience. I clicked through to your blog and what a great story I found. I'll be following your travails with interest. Cheers!
9 July 2009 at 15:11