Da Old Man of Crochety Old Man Yells at Cars, our blogging buddy and mentor over at Humor Bloggers Dot Com, continues to soldier on. Three and-a-half weeks ago DOM was rushed to the hospital with kidney failure. Since then there have been some complications. How do we know all this? Because DOM, trooper that he is, continued to blog about his predicament, beginning as he waited for the ambulance to arrive, through his dialysis, his staph infection, wrongly prescribed meds and mini stroke.
And having had to endure all this, you know what his big complaint is? He can't get an internet connection in the hospital! So he's been dictating his posts to his charming wife, Mrs C and she's been posting his hospital humour. Together the two of them have put a new spin on that Reader's Digest maxim: laughter is the best medicine.
DOM aka Crochety aka Joe is also a Yankees fan, so I wanted to get his blood boiling by letting him know this woman was a Mets Fan. 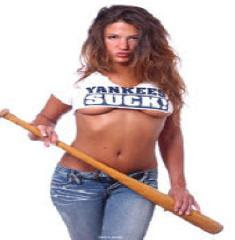 And I wanted to send my best wishes in true Humor Blogger fashion... 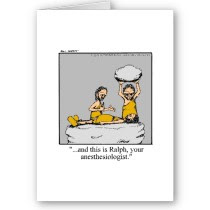 "...and this is Ralph, your anesthesiologist."

Drop by DOM's place at Crochety Old Man Yells At Cars to follow his progress and leave him a note to let him know you're cheering him on.

And DOM we're all pullin' for ya. Get well soon.
Update: 6pm - Dom was released from the hospital today and is now in rehab - no, not THAT kind of rehab. And he's no longer "DOM Unplugged". He's got internet access and he's begun blogging again. Great news!

Anonymous said…
Ew. I love my home team and ANYBODY who's playing the Yankees.

I firmly believe that the majority of these here United States of 'Murica feel the same way as I do.

US hospitals suck. Hopefully Joe has someone there to make sure they don't accidentally remove something they shouldn't when he's not looking.