June 03, 2009
I used to have a boss who always used the phrase "displacement activity". She said that's what she called everything she did except for what she was supposed to be doing. 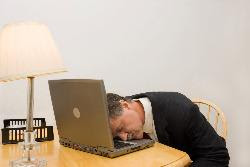 I dunno, I used to call it procrastination, but I had to admit "displacement activity" sounded better, more positive, reinforcing if you will.

When you think about it, displacement activity is kind of like Attention Deficit Disorder for adults. But it's self-directed and you don't have to take drugs for it.

For example, over the last two days I've done everything but sit down to write this post. And I filled the time with displacement activities - one after another.

I made myself breakfast and showered. I paid bills. I watched the French Open. I cleaned the pool. I read a magazine. I visited a bunch of blogs. I trimmed my nose hairs. And I undertook a few other activities of lesser consequence. (After all, nose hair grooming is pretty important.)

So, here I am after a day and-a-half of displacement activity and...

...wow my toe nails are getting long.

Mike said…
So that's what my life is defined as.

DouglasDyer said…
I just did a massive displacement activity at work. First floor, second stall. You're gonna want to give it a few minutes before you go in there.
3 June 2009 at 09:28

David said…
My nose hair care has displaced amazing amounts of time and activity in my life.

It is so rewarding to know there is a beacon of light on the interwebs such as yourself bringing this probing issue to the attention of the public.
3 June 2009 at 11:22

nipsy said…
I am so using that line the next time the man tells me to stop procrastinating. "But honey, I'm just having a displacement activity moment".
3 June 2009 at 16:07

nonamedufus said…
Mike: I know mine is!

Doug: Thanks for the heads up.

little paulie k said…
WAIT--YOU HAVE A POOL? It's plain old attention-deficit disorder under another veiled term.
5 June 2009 at 12:21

nonamedufus said…
Chris: My pleasure. It's just one of the many services we have at your disposal.

Mary@Holy Mackerel said…
You're damn right nose hair grooming is important.It's my first and last task of each and every day. I kid you not.
5 June 2009 at 20:43

David said…
My nose hair care has displaced amazing amounts of time and activity in my life.

It is so rewarding to know there is a beacon of light on the interwebs such as yourself bringing this probing issue to the attention of the public.
12 May 2011 at 15:17