This Guy Could Really Use a Hand 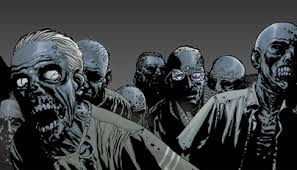 Bob the Zombie had nothing but bad luck.

When he went to a hockey game there was always a face off in the corner.

When he went to see his divorce lawyer he was told he didn't have a leg to stand on.

A comedian, he often visited the hospitals in search of sick jokes. His jokes were so bad he rarely got a hand. But he worked so hard that even though his jokes were rotten he was often dead on his feet.

Often when he returned home late from performing his wife would give him the cold shoulder. Often they would  fight and no one would really win because there'd be a dead tie. Although his wife often came near winning with her shouts of "You wanna piece of me?"

The only thing that kept Bob going was the thought of his new girlfriend Rachel, who he really liked  for her brains. Yep, and she was pretty smart too.

He had agreed to meet her at the bar that night called the Revenant and to settle his nerves he ordered a zombie and sat at the bar.

About twenty minutes later Rachel arrived with a bunch of guys all with a hungry look in their eyes. Well, those that had eyes. The rest just had a vacant look. Uh-oh, thought Bob "This doesn't look good." And as the first rebel zombie sunk his teeth into the comedian's decaying flesh he turned to his friends and asked "Hey, does this taste funny?"


Revenant/zombie were the prompts this week from Studio30+ which I thought was pretty ghoul, how about you?