June 08, 2012
Well, I made it to Week 2. I'm not sure how, but I did. And congratulations to those of who who have managed to come up with a post every day so far. To the rest of you, and you know who you are, what a bunch of wordless wusses. That's right. I know there's no rules but infrequent posts? It's not called 12 and-a-half days of words, you meme miscreants. You guys are this close to not being my best blogging buddies. Ah, well. C'est la vie on the internet.

Today's prompt is "best friend". Of course. these days my best friend would be Mrs D. No kidding. As we settle into middle age - one of us more settled than the other - we really are the best of friends. 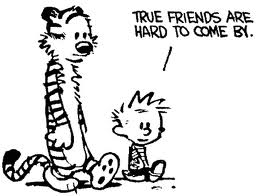 I've had best friends throughout my life. For instance, when I was a kid living in Toronto my best friend, Jeff, lived two doors down the street. He and I did everything together. Played, rode our bikes, watched TV, ate. Some of our closeness may have had something to do with his mother. Man, she was hot. Laura. And Laura loved to lounge by her pool - the only pool on the street - in her bikini. Sure I was only 8 or 9 at the time but, hey, a guy can dream can't he. No wonder I spent so much time at Jeff's house.

When I was 10 I moved to Ottawa so my Dad could take a new job with the federal government. My best friends are probably all in jail now, or went through reform school. Gives you some idea of what kind of crowd I hung out with. We hopped railway cars, smoked, stole bags of chocolate wafers from the grocery store (the same grocery store I'd work in as a pack boy seven or eight years later - when I was reformed.)

Around this time I hung out with my best friends Paul (of Paul, Gary and what's his name's fame last week) Bob and Derrick. We hung out together, drunk each other's Dad's liquor, hopped on the bus over to Hull, Quebec with suitcases and guitar cases that we filled with quarts of beer. We listened to music in each other's basements. Paul and I played in a couple of short-lived rock groups. And then I got married and Paul was my best man when I married wife #1. Later in life I read about Bob who got charged with dealing dope. He later died. And Derrick planned on being a lawyer. If he made it he might have gotten Bob off. Who knows.

When I was working in government I had a good friend Pierre I used to work with. He became my fishing buddy and we used to head up to Lake Temagami north of North Bay, Ontario every summer for bass. We had some great times. Pierre and his wife now spend 6 months of the year in Fort Lauderdale. He sold his boat. I don't see him as much but we still have lunch now and then and we're still good friends.

These days I have a couple of new friends, Whitey and Steve. Yeah, my brothers. While Whitey and I were visiting Steve in Florida this winter I said to one of the guests at his birthday party that the three of us were probably closer now than we ever were before. I'm the oldest. Steve came along 7 years later and Whitey (real name Jim) 3 years after that. So we weren't very close as kids. Now, though, we're pretty tight, despite our difference in age. Although many folks, including some at this party think Jim's the oldest, much to my delight. 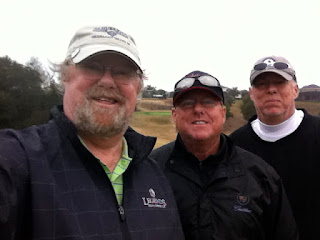 I took up golf about a year ago. My brothers have been drinking golfing for years. But I don't think it's the beer golf that brought us closer together.

No, we have something else in common.

With Jim turning 50 this fall, we're all fuckin' old!

Don't forget to head on over to Nicky and Mike's place at We Work for Cheese (and soon to be Cats) and check their dinky linky thingy to see who else is engaged in this little meme today.

P.J. said…
This is a great post and a cool trip down memory lane. One really wild thing about this challenge is I've really been getting the chance to see some clips of people's lives. Very cool stuff. I've become closer to my brothers, too, as we've gotten older.

I have 6 siblings and it was very hard to be close growing up, with such an age gap between most of us. but as you get older, that closeness comes.
8 June 2012 at 10:12

Wendy said…
Another Calvin and Hobbes fan-ya! As pretty well an only child (no we won't get into those details), I rather even those of you who have great bonding with siblings. Age matters so little later in life, especially with family and friends.

If I were God... said…
I was very pleased to see Calvin and his somewhat imaginary friend. But that panel can be read two ways. Not just 'Calvin loves Hobbes', but poor Calvin knows he has no true friends.
8 June 2012 at 13:08

Cheryl P. said…
I love that Mrs. D is your best friend and your brothers are best friends as well. Family is everything in my mind. I, too think my spouse is my best friend.

Leeuna said…
My sister and I are very close. We've always been a tight knit family and now that our mother is gone as well as our oldest sister, Angelia and I are the only ones left and we're closer than ever. There's nothing like family.
8 June 2012 at 13:27

nonamedufus said…
Yes, that's actually a real pic. My brothers will likely kill me but now they're on the internet for posterity. That was at the Legends Country Club new Orlando.
8 June 2012 at 13:45

nonamedufus said…
You know, our parents are gone, too. And that may have something to do with strengthening the bond between/among us.
8 June 2012 at 13:47

meleahrebeccah said…
my father is ten years apart from his brothers too. They didn't become best friends until adulthood also!
8 June 2012 at 13:51

Linda Medrano said…
I am so glad your brothers are your best friends too! That's the way it should be, but usually isn't! Great shot of all of you! But I dont' think there's an old man in the bunch!
8 June 2012 at 13:53

nonamedufus said…
Funny how that works, isn't it. When you're younger 10 years seems like such a gap; a different generation. But when you're older you're ALL older. And if you're lucky, like me, people think your youngest brother is the oldest!
8 June 2012 at 14:08

nonamedufus said…
We all live in different cities but when we get together we make it count and have a really great time.
8 June 2012 at 14:09

Nicky said…
That's a great shot of you and your brothers, Dufus! My older brother and I weren't very close growing up, even though the age difference is only a couple of years. He moved to Vancouver nearly 18 years ago. We got along much better after that. :-)
8 June 2012 at 16:16

Anonymous said…
I think I've read too many Jackie Collins novels. Or is it Joan Collins? Does it matter? LOL

Anybro, I think it's FANTASTIC that your wife and bros are your BFFs.

That's HUGE in this day and age. You all are to be commended for it.

K A B L O O E Y said…
Dufus! It's great to see your smiling face there, and even better to read that post about your best friend, and how you're closer than ever to your brothers. Wow. That's a good life.
9 June 2012 at 23:12