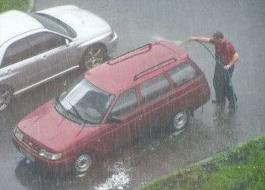 I hope this pic doesn't dampen your enthusiasm this week.
Leave your caption.
Saturday it'll all come out in the wash.

ba_hutch said…
Fearing the effects of acid rain on his new vehicle, Joe tries to stay ahead of the potential damage.
24 November 2010 at 08:11

Anonymous said…
LOL at Georgina! I don't think I can even come close to topping that one!

Another manifestation of how Bubba was permanently ear-wormed by Milli Vanilli's, "Blame It On The Rain."
24 November 2010 at 10:01

00dozo said…
Joe attempts to beat Murphy at his own game.

skeeter said…
This is why you never hire a divorce lawyer that moonlights as a meteorologist!! They never get shit right!
26 November 2010 at 10:00

ReformingGeek said…
Lather, rinse, repeat. Mother Nature, I told you I would rinse this time. You were supposed to lather. Sheesh.
26 November 2010 at 15:21

Quirkyloon said…
LOL at Georgina! I don't think I can even come close to topping that one!

Another manifestation of how Bubba was permanently ear-wormed by Milli Vanilli's, "Blame It On The Rain."
12 May 2011 at 14:50