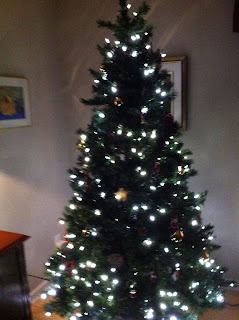 Mary tossed and turned in her bed. She tried to sleep but her mind raced with thoughts of Christmas tomorrow. She was unable to shop for her little son Brian. Her cancer prevented her from getting out of the house, let alone out of bed.

Nine year old Brian had been a big help to her as her disease worsened. He cooked her soup and fetched her water and juices when she was thirsty. He was such a comfort. His efforts seemed to indicate he was much older than nine.

It had been just the two of them for the past year. Mary's husband Paul had left when Mary's cancer took a turn for the worse. Good riddance thought Mary. He wasn't of any help. Not like Brian. Poor Brian. He wouldn't be celebrating much of a Christmas this year.

But Brian was an optimist. Aren't most children? All he wanted for Christmas was for his Dad to come back. He didn't care about puzzles or toys or the latest electronic gadgets. He just wanted a family again.

This one thought filled his mind as he drifted off to sleep.

He awoke all of a sudden certain he had heard a noise downstairs. He slipped out of bed and slowly crept down the staircase. He edged along the wall and peeked around the corner into the living room. He couldn't believe his eyes. There in the corner of the room stood a Christmas tree fully decorated and brightly lit. And beneath the tree were gift wrapped boxes.

"What do you think, Brian?" came a familiar voice from the other end of the room.

"Dad" yelled Brian as he ran to his father and was scooped up into his arms.

And so Brian's wish was more than granted and he couldn't be happier.

However, his happiness wouldn't last for long. And for Brian Christmas would be bittersweet.


The prompt from the folks at Studio30+ was bespoke/indicate this week. This wasn't the most uplifting Christmas story but sometimes in life there's a yin and a yang where you have to take the bad stuff with the good. Cancer can be such a depressing disease. We're best off taking one day at a time and experiencing joy in the positive small things each day brings.

Merry Christmas to all my friends, commenters and drive-bys. May Santa bring you everything you wish for.