A Blend of Bedtime Stories 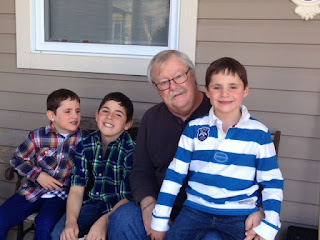 John loved having his grandkids stay over for the night. He'd developed a ritual whereby they enjoyed an apple juice and a chocolate chip cookie before brushing their teeth and climbing into bed. Once they'd climbed into bed and been tucked neatly under the covers John told them a story. A blend of stories from his own childhood.

For example, he told them about the time when his babysitter, Mrs. Painter gave hime a quarter to take to the corner store and buy hamburger buns. On the way he had dropped the quarter down a pipe because he'd want to see if it would fit. After several quarters more he'd realized those quarters were all the same size. His grandkids had laughed at that one.

He told therm about the time he'd gone to see the Toronto Maple Leafs play baseball. That's right, there was a time, a long time ago, when Toronto had a baseball team named the Maple Leafs. He was so inspired he tried out for the local baseball team as a pitcher. Unfortunately, John soon learned his strengths laid elsewhere because whenever he'd pitch the ball it would end up flying over the backstop. His grandkids laughed at that one too.

But the story John's grandkids loved the best was the one he told about his own father, Ed, as a child. Ed's family lived back in the day of horse and buggies, milk delivery from ice trucks and coal furnaces in the basement. Ed's family certainly weren't the richest so Ed had few toys. He had to make his own fun and so spent hours playing in the basement in the coal bin with his toys. He'd pretend the mountain of coal was a real mountain and would run his little car toys through the chunks of fuel. Of course the downside of Ed's play place was that he'd be covered in soot from head to foot. So he took many, many baths.

And then one day when Ed came to play the basement was empty. The blocks of coal were gone. Ed's family had gone electric and so there was no need for coal anymore. The tears began to run down Ed's cheek as he realized he was coalesce. Of course Ed wasn't the best speller.

Unfortunately, John's grandchildren were too young to get the joke.

Over at Studio30+ coalesce/blend was the prompt this week. I don't know why they still put up with me. I think they might soon be coalescing around asingk me to stop with the puns.