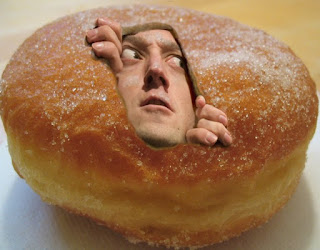 Gunther was quite pleased with himself. He'd made it to the final five of the Swedish version of MasterChef. This was the serious version of the show. There was no hint of the Muppet's Swedish Chef anywhere.

Gunther knew if he wanted to make the final two, and after that win, he had to make a special repast that would impress the judges and, in future, result in his moving on.

But he had to come up with this himself. Matilda, Bjarne, Enok and Lukas - his competitors - would be planning their individual meals too. But he had to go them one better. He had no beef with the other chefs. But he knew he couldn't be chicken about his efforts.

He set to work. When the mystery ingredients were revealed he knew absolutely what to do in the hour allowed. He knew his Kroppkakor, Swedish Meatballs and Toast Skagen required a deft touch. But he knew he was up to the challenge.

As the allotted time wound down Gunther knew he had created something special. But he wasn't sure how it matched the efforts of the other four chefs.

He waited. Finally it was his turn to present his efforts to the judges. They told him his plating was perfect and that the flavours in his dish were simply amazing. Moreover the meal was cooked to perfection.

Gunther breathed a sigh of relief and was beside himself when a judge paid him the highest compliment there was on Swedish Master Chef.

The prompt from the folks at Studio30+ this week was facinorous (say what?)/fiendish, for which I should have posted a pun alert. Ah, well.