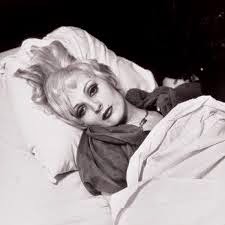 As she lay there, still, she lifted her heavy eyelids against the morning sun shining brightly through the sheer curtains. Her blond hair, once lovely, long and plentiful, lay splashed across the pillow, not for the first time but until now they had been under far better and much more memorable  circumstances.

Her body was ravaged by cancer and pain. Over the last few months it had gotten worse, much worse. "I've had a good life" she nevertheless thought to herself, with a smile playing upon her chapped lips. "A very good life" she thought although she was only thirty-six.

And yet at such a difficult time she thought back on many positive things. A favourite song by the Beatles. A favourite book by R..J. Ellory. A favourite movie about that gardner fellow who, through a series of misunderstandings, rubbed shoulders with the elite of society.

And she thought of all the men in her life. She had never married. But she was by no means what some might call a spinster. Indeed not.

Among those that stood out were Robert who knew the way to a woman's heart and another part or two as well. And there was Jimmy, a quiet man in public but a screamer upon a mattress and she chuckled to herself at the memory. There was Bobby and Bill - at the same time. Adam, George, Joe and Pete. And there was Conrad the contortionist, passing through town with the circus, who had squeezed his way into her life.

Yes, she thought with a grin, I've certainly never been lonely and I've never been unsatisfied.

And yet she couldn't help but feel, as she neared death from that spreading cancer, that something was missing.

That's it, she cried to herself as she lay on her deathbed, thinking back on the men in her life and of that movie she liked.