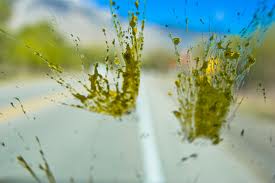 It's like sometimes you win, sometimes you lose...but far more descriptive. I mean have you ever had it happen to you? You're driving along as the sun's just gone down. You turn on your lights in the dusk and the bugs just seem to flock to your windshield, drawn as if by a magnet. Now, of course, you're faced with a choice. Do you just leave them be or do you flip on the windshield wipers and shoot windshield wiper fluid at your windshield. If it's ever happened to you, you know this is a no-win situation. Trying to clean them off usually makes it worse. You better hope you find a gas station...or a guy at the side of the road who wants a dollar...with a squeegee. That's the only way.

And, of course, the bug never wins. It's always the windshield that comes out on top.

When I was a kid, though, riding my bike on paths through nearby fields, the bugs won...in a suicidal fashion. Of course I had no windshield on my bike. And as I pedalled faster and faster I'd open my mouth wide to catch my breath and, alas, that wasn't all I caught. Yep, I swallowed a bug or two in my time. Quite a few, actually. And people wondered why I looked bug-eyed half the time.

It's like Mark Knopfler and Dire Straits once said...

Not only that, he sang it, too:

Unfinished Person said…
This looks sort of familiar. ;) Nice job with spinning off the idea. I'm listening to the song now...
5 November 2012 at 12:32

nonamedufus said…
Yes I have to admit this post is in response to your suggestion after I accidentally said sometimes you're the window, sometimes you're the bug in a fantasy football chat on the weekend. Thanks for keeping it real Bryan. There's another version of the song by Mary Chapin Carpenter that's pretty good too. http://youtu.be/q_rbjg2k6cI
5 November 2012 at 15:05

nonamedufus said…
And yet you've survived to fight another windshield! (Just what kind of a bug are you?)
5 November 2012 at 18:15

Cheryl said…
Last week I hit that humongous windshield of life when I finally realized I am not, in fact, invincible. It's a bit of a relief to get that one out of the way. It's all sideways from here.
6 November 2012 at 06:06

Cheryl said…
What? You think it isn't age-related with me too? After 50 it's just pieces and parts and apparently, windshields flying around waiting to smack us upside the head.
8 November 2012 at 17:45

nonamedufus said…
I was trying to be polite. Watch out for those windshields. They hurt.
8 November 2012 at 17:45